The researchers of the After the Crisis project also incorporate the core themes of the research initiative in their teaching.

In the Fall Semester of 2015-2016 Onno van Nijf and Inger Kuin are taught an MA course titled Athens and Rome: Culture, trauma, and memory in Roman Greece at Groningen University. As part of this course students traveled to Athens to see first hand how Roman rule and the accompanying conflicts marked the cityscape. 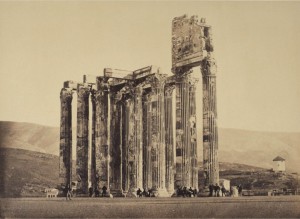 Temple of Zeus at Athens, finished under Emperor Hadrian. Picture by Dimitris Konstantinou in 1858.